Please switch to a modern browser like Chrome, Firefox or IE10+ for better experience.

for All platforms
POP! Slots Casino

POP! Slots Casino
All platforms
OR
Thanks for contacting us. Your message was received.

Piggy Pop can be found in the Aria casino during special in-game events. It is not open outside of these events.

There is a set of 5 coins above the reels; each coin positioned directly above one reel After each reel spin, the coins move from right to left, changing the value above each reel.
When a piggy symbol lands on the screen, the player wins the value of the coin located above that reel at the end of the spin.
More than 1 piggy can land at the same spin result.
Each bet has its own set of coins saved, both in terms of coin values and locations above the reels.
Bet eligibility- When increasing the bet, the number of coins that can be collected over a single reel increases. (Starting from left to right).
Lowest bet - all reels are set to 1 coin, Highest bet - all reels are set for 3 coins.

The tournament starts randomly for all players. The goal is to collect tokens to advance and get to the last stage. The tournament has 3 rounds and a final Piggy Bank Wheel round that all players can watch.

"I WAS ASKED TO WATCH THE BONUS. WHY WAS I NOT INCLUDED?"

Don't worry, this does not mean you were excluded from participating. It simply means one of the Tournaments is over and other players like yourself will be given the option to watch the final round of players that made it to Tournament Round 3 and the final Piggy Bank Wheel.
Note: the tournament is the only way to get to the bonus round. 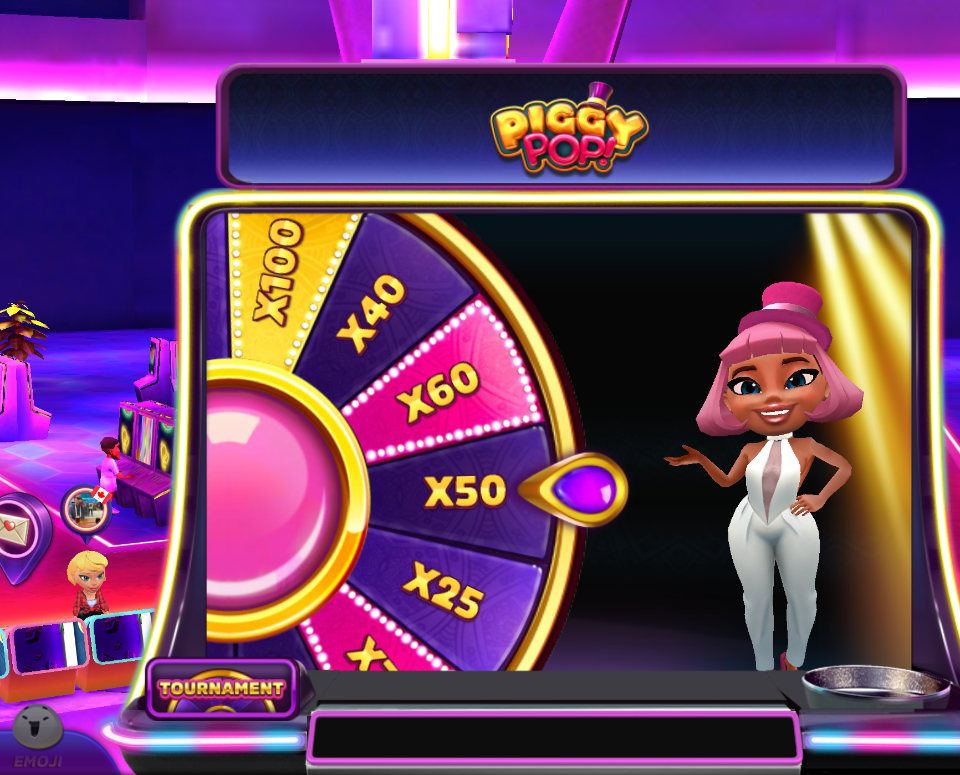 3 Bet options will be displayed for the players when the tournament is triggered. Each bet grants an initial number of tokens. The higher you bet - the more tokens you get. Players have the choice to press “X” and keep playing on the machine instead and keep their Starter Bonus Wheel chips. 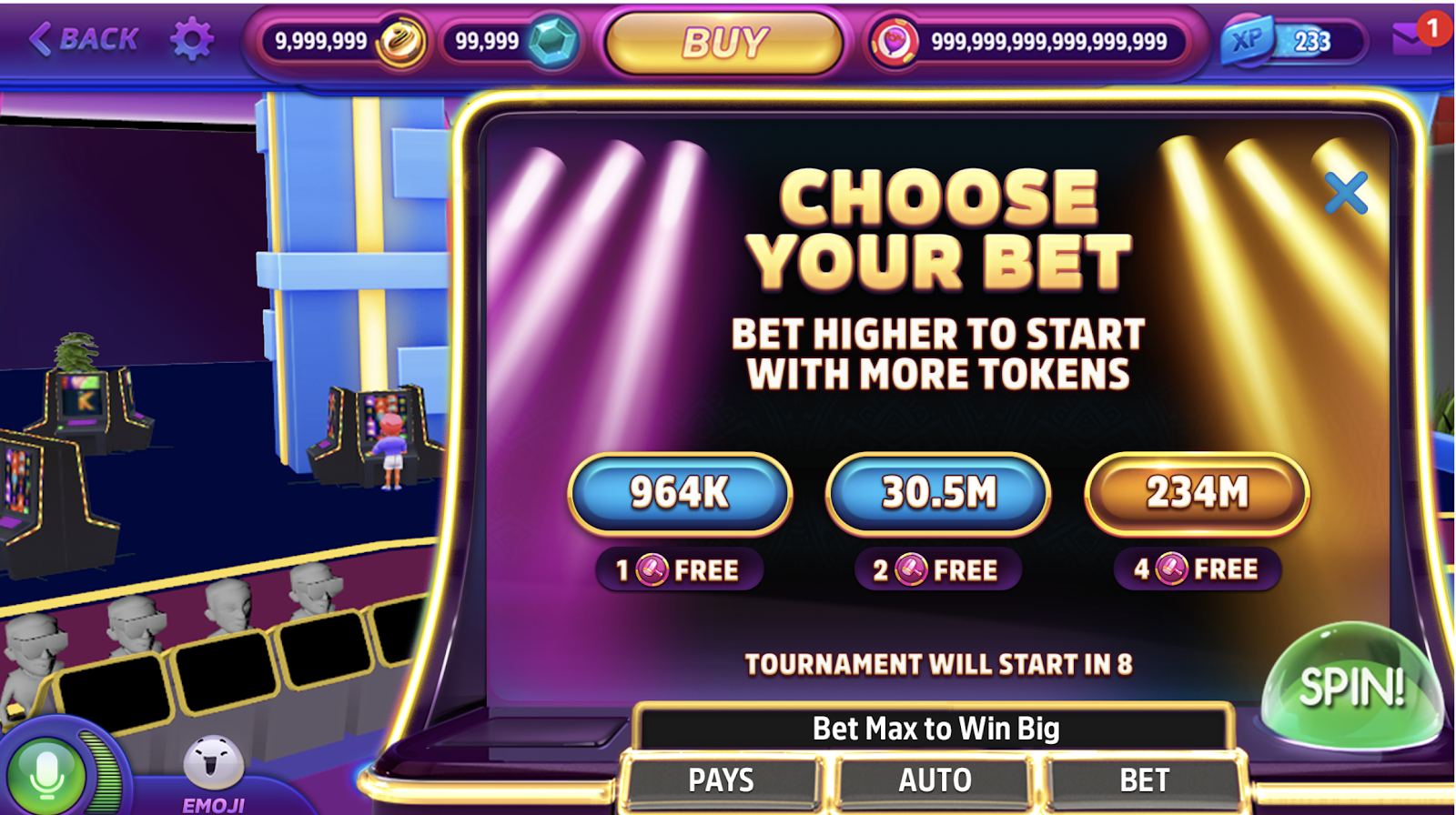 ROUND 1 QUALIFIER : Collect the displayed number of hammer tokens to progress. If you do, you'll move to round 2. If you do not, you'll return to the standard slot to continue spinning. 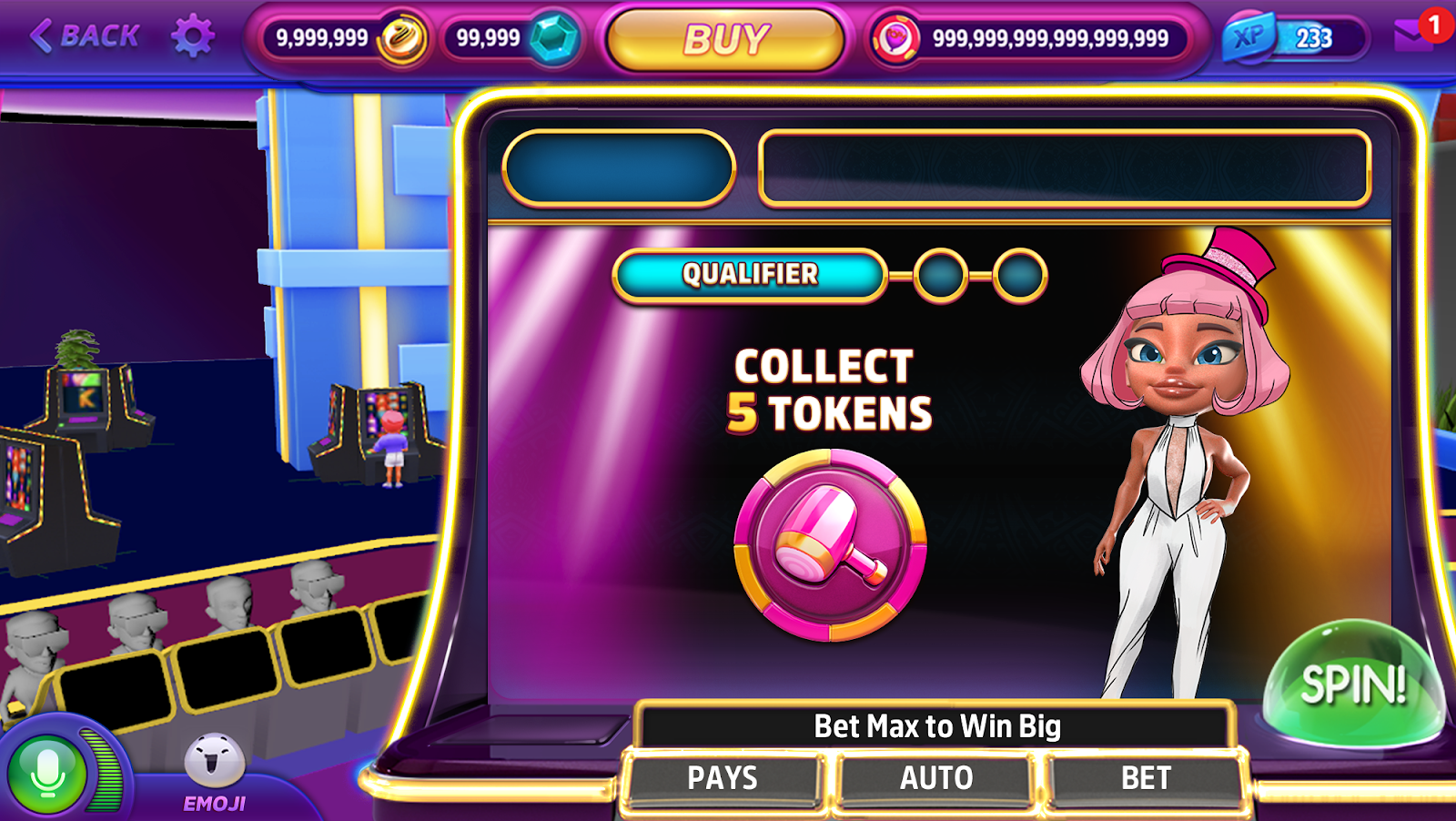 ROUND 2: All qualified players compete to collect the required number of hammer tokens to earn one of the spots in the final round. The number of spots and hammers is determined by the number of players that qualified in round 1. If you do not make it to round 3, you'll still receive additional winnings based on your original bonus credits. If disconnected during round 2, these winnings are sent to your INBOX after the bonus has ended. 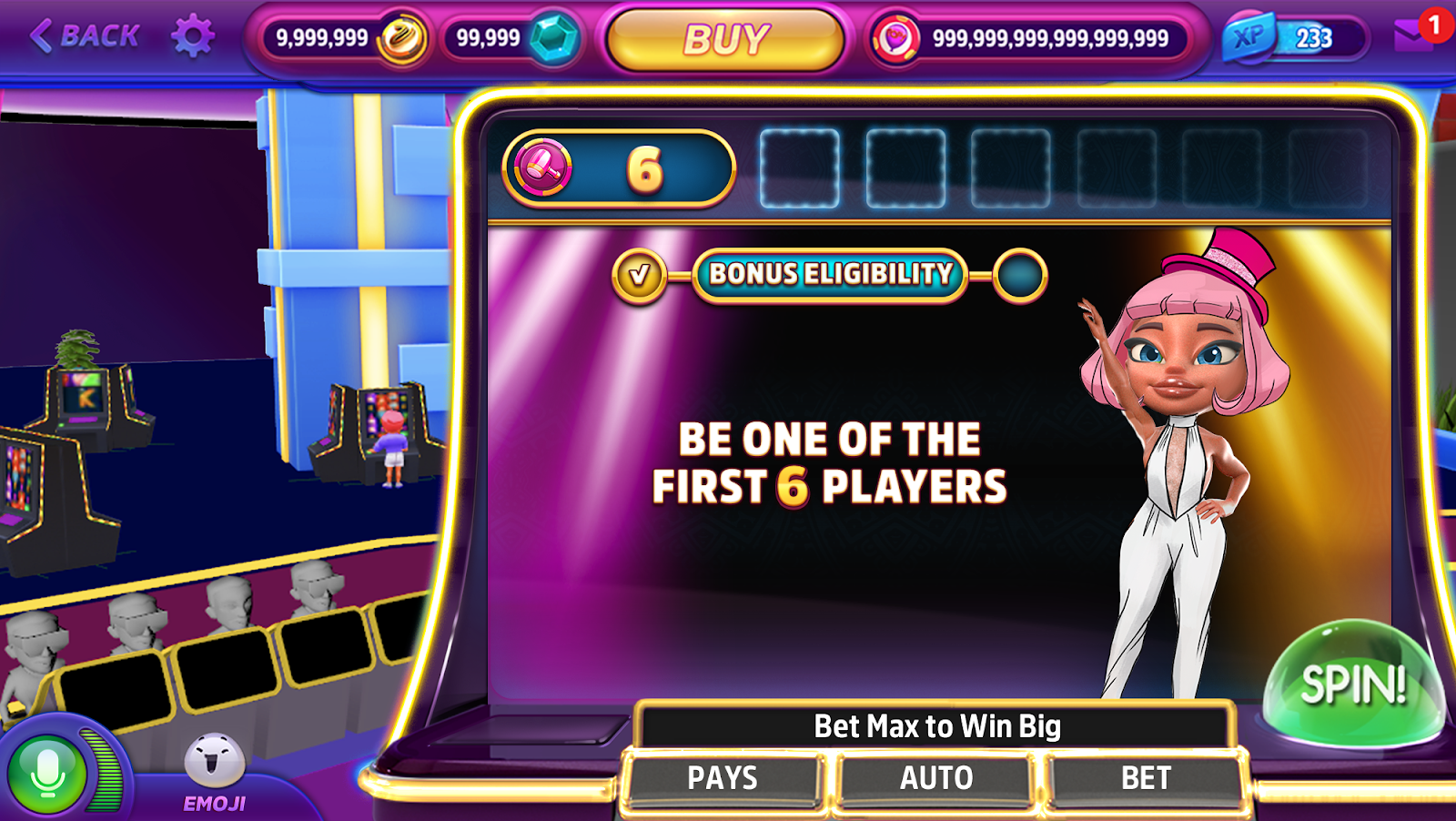 ROUND 3 : In the 3rd and final tournament round, the remaining players compete against each other to win the most hammer tokens to become the Bonus Leader.
Each stage takes 90 seconds. 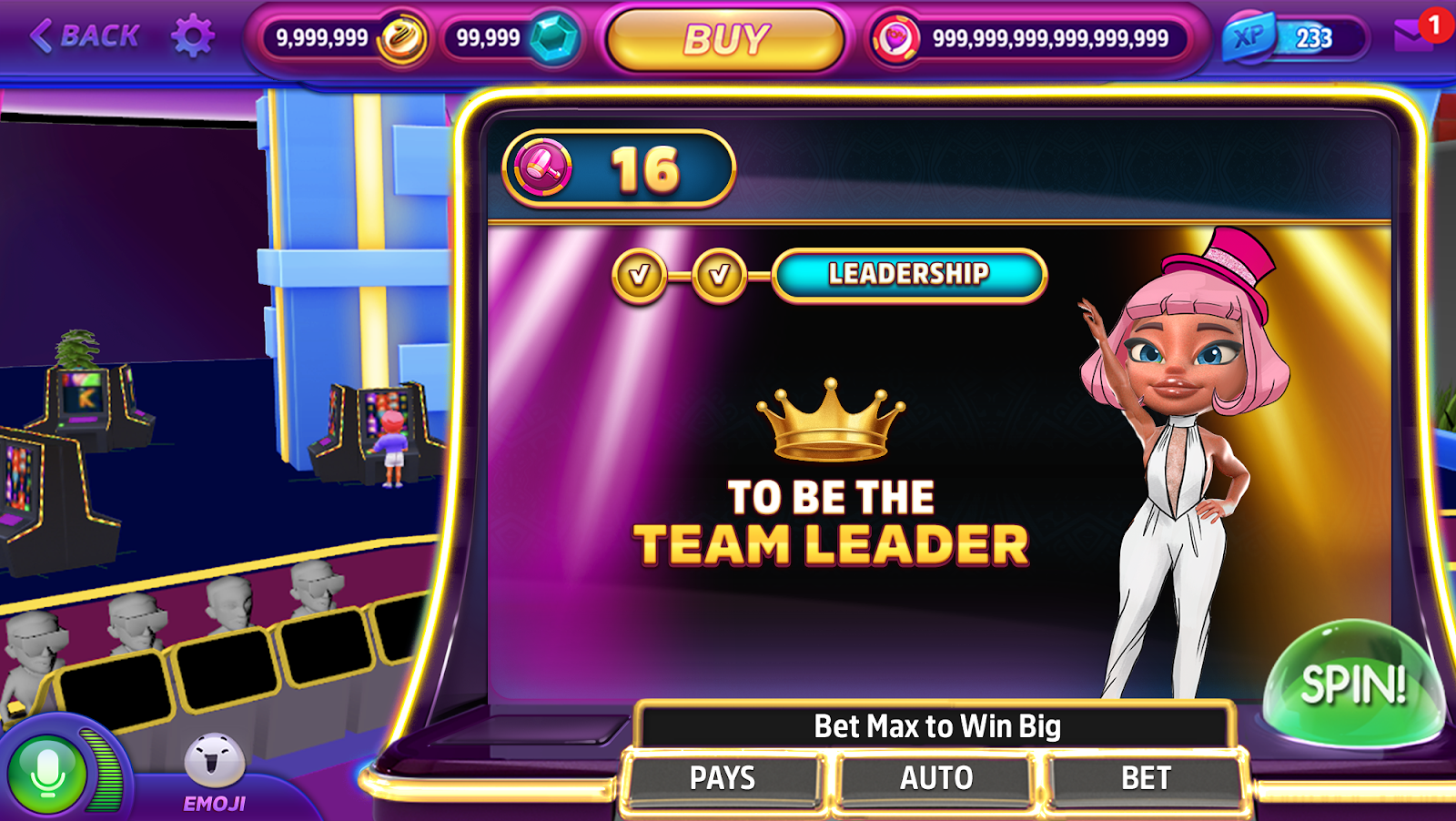 FINAL BONUS ROUND
The bonus leader swings the hammer to try and break the piggy bank. Hit the button to spin the wheel and collect multipliers for the group. Land on an arror wedge to advance to the next wheel. The final wheel is the piggy bank, and breaking this gives the largest win. 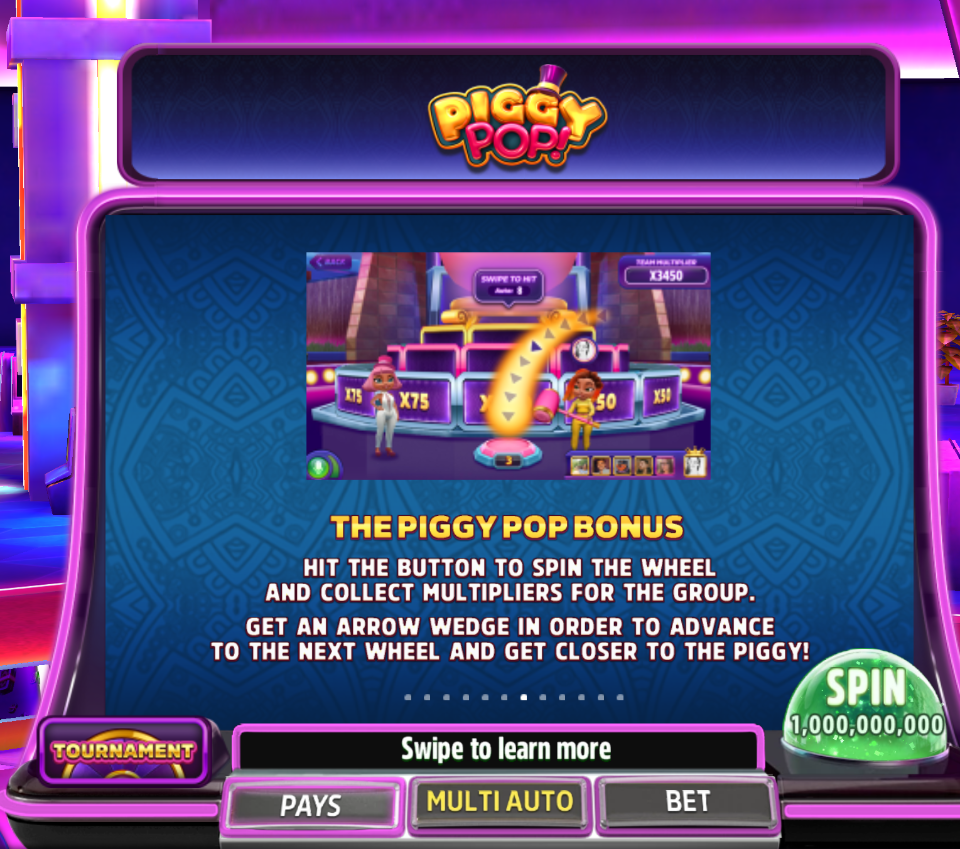 "I WAS DISCONNECTED DURING THE BONUS. DO I RECEIVE ADDITIONAL CHIPS?"

Your browser does not allow you to contact us from this page because third party cookies are disabled. Click continue to open this form in a new tab.

Something went wrong! Please reload and try again. We're sorry for the inconvenience.

You're navigating to a different app. You'll be able to continue the current conversation only when you switch back to the current app.